WHAT WE ARE ALL ABOUT ….

Caring Economics is about economic policies that care for people and for the planet. The model of Caring Economics is focused on maintaining, continuation, and repairing the world in which we live, in order to improve quality of life for all in a sustainable way, leaving no one behind. The coronavirus outbreak reveals that care is a deeply rooted universal human value that works in times of profound crisis, when people are taking responsibility, acting in solidarity and caring for themselves and for others who need help. If we build our future economic model on the universal value of the caring human being, instead of the ‘homo economics’, we will get a completely different world that increases happiness and quality of life instead of Gross National Product.

Care work is an activity that can be expressed in objective criteria such as time or (equivalent) value. Care also has an intrinsic value that refers to an attitude or moral orientation, which expresses specific emotions of inter-relationship among people, such as lovingness, affection, warm-heartedness, friendship, esteem, tenderness, responsibility, concern about someone or something, commitment and attentiveness.

The Economy of Care is a model based on the paradigm of the ‘Caring human being’, a human image based on a holistic approach, which recognizes and values the multiple identities of individuals and groups of persons, their interdependency and mutual bonds.

Our mission is to create an economic model that is human-centred and respects the limits of our planet.

The approach of Caring Economics embraces the Ethics of Care, a new philosophical school that surged since the 1980’s and describes the significance of  women’s contributions to society, including pro-creation, mothering and unpaid care labour, and “everything that we do to maintain, continue, and repair our ‘world’ so that we can live in it as well as possible. That world includes our bodies, ourselves, our environment, all of which we seek to interweave in a complex, life-sustaining web.” (Joan Tronto, 1993)

We are part of the initiative of World House in Wetten (Germany), a conference guesthouse that pursues to put in practice the concept of caring economics at micro-level;

We exchange knowledge and experience about caring economics with the international network of experts of OQ Consulting;

We organise training and summer school on caring economics in theory and practice.

The Economy of Care

The Gender Impact of Coronavirus 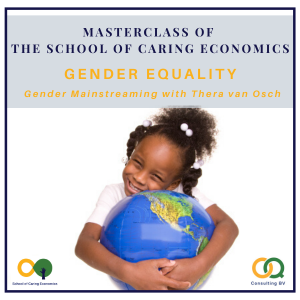 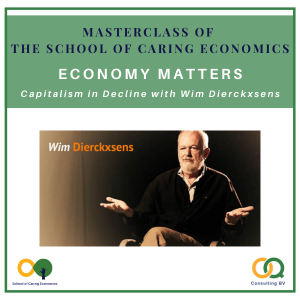